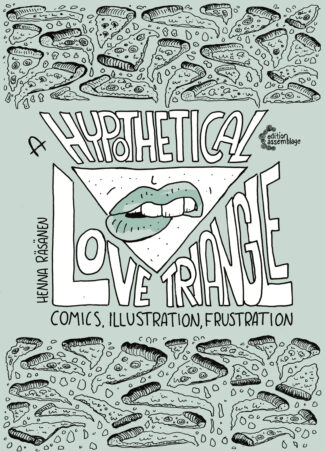 A ride through queer femme and punk rock, fantasy book references and autobiographical revelations, from the Femmey Hallows to the heartbreaking story of a dying bird – the book shows a collection of Henna Räsänen’s selected comics and illustrations from 2010 to 2016, both previously published and brand new dashing comics!

Räsänen’s work focuses on portraying queer and punk life through understanding, honest and prickly humor, as well as commenting the current political situation in North-Europe. As an alternative comic artist they are interested in both politics and poetics of comics, from norms to the awaiting apocalypse.

A subjective documentation of life between Berlin and Helsinki in 2010 – 2016, seen through the eyes of a comic artist.